What to Eat in Spain: Famous Spanish Foods 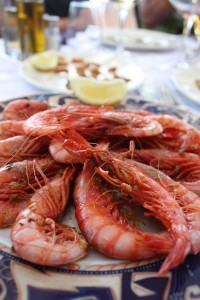 Welcome to the food capital of Europe: Spain is home to an impressive number of Michelin restaurants, top-notch chefs and world-known dishes. Food is the supporting pillar of the Spanish society – I’m not kidding, you’ll see it at any cultural festival celebrations, political gathering and even funerals.  Of couse, Spanish food is also the pride and joy of the country – ask any Spaniard, and he’ll tell you which cuisine is the best. Well if you happen to disagree, then you obviously haven’t made your way to Spain. Either that, or it’s time to revisit!

Once you’re here, you’ll be pleasantly surprised to find that Spanish food is more than just paella and sangria. Spanish cuisine is as diverse as ethnicity is in New York City. It ranges from small delectable tapas to generous meaty proportions and bizarre exotic fare. Sadly, tourist restaurants often hawk standard fare that are overrated and overpriced. Your best bet would be to hunt down quiet alleys and go where the locals gather. You’ll be stunned by how long the menu runs.
Spanish food is also regional. with each slice of the country famous for different foods. If the north, you might find meat stews that are heavy for the stomach, while in the south, refreshing cold gazpacho provides an excellent respite to the heat. There is something for everyone in Spain – although being vegetarian is often frowned upon in Spain, you’ll still find some unconventional veg dishes that are right up your alley.
Here’s a brief roundup of famous dishes in Spain and where to eat them. 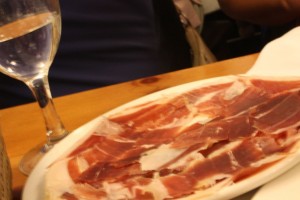 The holy grail of all Spanish food, Jamón is worshipped by all Spaniards. Whichever corner of the country you go to, you’ll be convinced that this is a godsend. The cured Spanish ham is often seen hanging from the ceilings of almost every bar in Spain – a rather overwhelming sight at first, but you’ll soon get used to it. They are then cut off the leg, in thin slices. There are several species of cured ham, among which the créme de la créme is the Jamón Iberico de Bellota – produced by pigs fed with acorn (bellota).
Where to find the best jámon? The best jamón serrano is said to come from the highest village in Europe: Trevélez, a mountainous village in the Alpujarras of Southern Spain. The other type of jámon: the Jámon Ibérico is widely produced in Extremadura and Salamanca, where the natural habitat of the Iberian pig can be found. 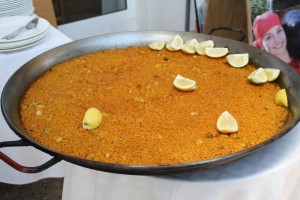 Behold the most famous Spanish dish in history: soft saffron rice cooked for hours, with seafood or chicken to give it that outrageous flavor. Paella is probably the signature dish of Spain, but not many know that it actually exists in various forms. You can find seafood paella, chicken paella, rabbit paella, fideau (similarly cooked but with noodles), black paella (cooked with squid juice)… the list goes on.
Where to find the best paella? With Valencia as the birthplace of paella, you can expect to find the best and most authentic all over Valencia. It has become a custom at festivals, political gatherings and parties in the region of Valencia to prepare enormous paellas, sometimes to win a mention in the Guinness Book of World Records. 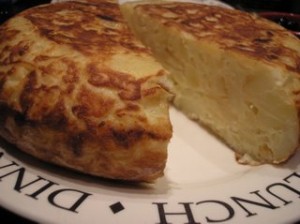 A simple dish of potato cubes chunked together in a giant omellete, the Tortilla de Patatas is sometimes called Tortilla Española because of its huge popularity among the locals. The Spaniards like to joke about how tasty and filling their tortilla is as compared to the Tortilla Francesca (plain omelette with no filling). There are several variations of the omelette: Some like to include different ingredients to make their own versions of it. These condiments include green peppers, chorizo, courgettes, aubergines, mushrooms, or diced ham. In many bars and canteens, it is served in a bocadillo (a sandwich made with crusty bread).
Where to find the best tortilla?As compared to the other foods on this list, the tortilla de patatas doesn’t have an exact place of originality. It is more of a casual comfort food that you order in bars just for a quick snack. To find the best tortilla, look out for a crispy exterior and a soft, slightly wet, texture within. One region that stands out for slightly quirky tortilla is Asturias, its tortillas are thicker than elsewhere. 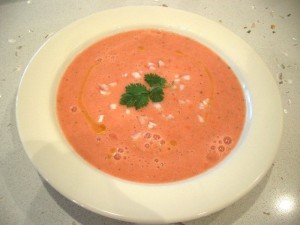 This refreshing appetizer is a summer dish, enjoyed by many in Southern Spain and along the coastline. The raw tomato-based vegetable soup is served cold and fresh from the blender. The gazpacho is usually made of stale bread, tomato, cucumber, bell pepper, garlic, olive oil, vinegar and salt – all blended together to produce an enticing concoction. Similar cold raw soups such as salmorejo (also tomato-based, from Córdoba) and ajoblanco (garlic-based soup) are also popular in summer.
Where to find the best gazpacho? Andalusia is the birthplace of gazpacho, and hence it is said to have the best gazpachos in Spain. It is usually served as the first dish on set menus. 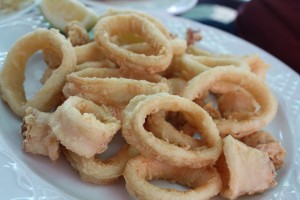 If you’ve ever been to any beach in Spain, you’ll see swamps of tourists and locals lounging around on outdoor cafes/restaurants, indulging in platters of fried calamares (squids). It is one of the most popular seafood dishes along the coastline. Squids from the Mediterranean Sea are said to be fatter and tastier than anywhere else. Here, it’s also fried to crispy brown perfection.
Where to find the best calamares?Again, the calamares is not much of a regional dish. Your best bet would be to head to any beach along Costa Blanca and Costa del Sol, beachfront restaurants usually serve up the freshest seafood and come Sunday, they are packed to the brim with hungry beachgoers. 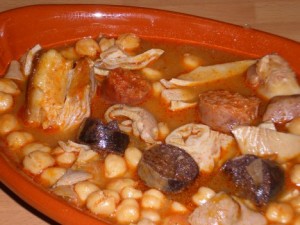 For the adventurous eater, Callos might feed your craving for some exotic fare. With bits of fats and tripes floating on a savory orange gravy, callos might not be your average comfort food, but it does catch the attention of many. As a carnivorous country, Spain consumes a crazy amount of pork each year. But the leftover parts of a pig are never thrown away, so where do they go? Into the stew to make this crowd-puller, callos.
Where to find the best callos? Its a true blue Madrileño dish. There’s no doubt that you can find the best callos in Madrid. Hunt down a quiet alley, suss out traditional-looking taverns where the older generation hole up, that’s where you should be able to savor some authentic callos.
Photo credit: Tortilla de Patatas, Gazpacho, Callos. The others are author’s own.