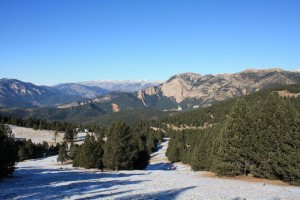 Mention Spain and you immediately conjure up images of hot, sultry summers, sun-drenched beaches and feisty flamenco performances. But like any other European countries, Spain experiences the four seasons in full glory – so don’t expect 40degC heat come winter.
Several beach towns in Spain experience sunshine 360 days in a year but not the entire country is this lucky. Head to the north and you’ll find sub-zero temperatures, emerald prairies, rain-soaked hilltops and snow-blanketed ski slopes. That said, most southern Spain cities experience a mild winter (temperatures averaging 5 deg Celsius or more) and beautiful sunshine. So if mingling with throngs of tourist crowds and traveling in the sweltering heat is not your thing, then consider coming to Spain in winter to experience the country is a different way.
For those on a tight budget, winter in Spain is also the lowest season for travel in Spain and prices are at their lowest. Airfare and hotels in Spain will cost less in winter than in summer, and it’s likely that some tourist sights will also have reduced rates – furthermore, you won’t be faced with long lines and annoying crowds. That said, try to avoid flying at Christmas or New Years’ when most Spaniards are trying to get home for the festive season. Like any other destinations, airfares during festive season are especially expensive, but for departure dates outside of this window, there will be many bargains to be nabbed.
Winter in Spain is a great time to go skiing – there are many skiing bargains and winter holiday deals available, with many of them departing from major Spanish cities. Some of the best ski resorts in Spain are in the Sierra Nevada (in Granada) and the Pyrenees (bordering France). December and January tend to be the busiest months while February and even March are the least crowded months to ski.
Spain weather in winter varies depending on where you are in the country, but on the whole, the southern parts of Spain (such as Malaga and the Canary Islands) experience mild temperatures while the northern cities like Santiago de Compostela can get extremely cold. Thanks to Spain’s location in the southernmost tip of Europe, you would experience generally milder and warmer climate here than other parts of the continent. The average temperature for most of Spain in winter is just over 5degC. Remember that those numbers are averaged out over a huge land area, however, so you’ll want to find out more about the specific cities you’re going to be visiting and what their climate is like in winter.
For More Information About Travel in Spain in the Winter: