In this post we’re going to take a closer look at the Ibiza club scene and what you can expect if you’re planning your first Ibiza clubbing holiday. 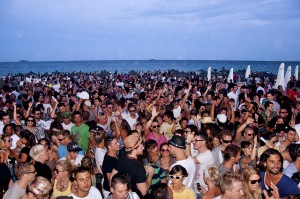 Upon arrival at Ibiza’s international airport you’ll immediately see just how important a part of Ibiza’s tourist industry the club scene plays. Promoters will try to sell you club tickets at the airport, every billboard on the drive to your resort will be advertising one club night or another – the island really thrives in the summer months from the tourist trade and the islands are alive with excitement. You can fly from Madrid or Barcelona to Ibiza.

For first timers, if you’ve opted for a hotel package chances are you’ll be in one of the larger resort towns of Playa d’en Bossa or San Antonio. Bossa is on the east coast, a short hop in a cab from the airport and home to the longest beach on the island and the infamous Space nightclub. San Antonio is on the opposite side of the island and houses the main bar area.

Most holiday villas in Ibiza are located just outside of these resorts in small villages so if you’re going to need taxis to get to the clubs it’s a good idea to get a driver’s number the first time they drop you off as many villas are tricky to find. Although not as glamorous sounding, you can still stay in a hotel in Ibiza.

Ok let’s get into this shall we, you came here to party, you’ve got 7 nights, what do you do?

First things first, a bit of preparation goes a long way when it comes to planning a successful Ibiza clubbing holiday. Research the parties happening while you’re out there before you leave and take a print out of the clubbing calendar with you. Despite all the promotion going on for club nights it’s often hard to find an up to date club listing once you’ve touched down.

If you’re interested in a certain type of music you might already have an idea of what nights you want to go to. Otherwise you’ll probably have most fun bouncing between some of the most popular nights at a mix of clubs. Each club plays different music each night so you can really take in a range of music (albeit to the untrained ear it may all sound like the same electronic loop!)

Resist the temptation to stick with the clubs local to your resort. The opposite side of the island might sound like a mission but in reality it’s only ever a taxi ride away or better still jump on the nightly party buses which shuttle clubbers from playa d’en bossa and Ibiza town to the San Antonio clubs each night during the season.

If it’s your first time in Ibiza there’s a few clubs which you have to visit. Space is the most iconic of Ibiza’s superclubs, specializing in balearic house and electro the best night to hit space is a Sunday. Privilege is the world’s biggest nightclub, located in an awe-inspiring complex in the middle of the island between San Antonio and Ibiza Town. Monday nights have been the biggest parties at Privilege in recent years with Tiesto; arguably the world’s most popular DJ playing a summer residency there.

Pacha, in Ibiza Town and Amnesia, on the main road out of San Antonio are also notable mentions, well worth a visit for first timers.

If it’s your first time in an Ibiza club, especially if it’s one of the really big ones like privilege, be prepared to be blown away by the scale of everything. It’s very easy to get lost in these places and find yourself in a totally new area or side room. It doesn’t sound very cool but you might want to make a plan to meet up with your mates later if you lose them or at least take your mobile with you. You’ve probably already heard about the astronomical prices of Ibiza clubs. Actually these haven’t changed all that much in the last few years but they’re still very expensive! Expect to pay around 40-50 euros to get into one of the big nights and soft drinks including water to start from 8 euros.

You’ll need to build these costs into the price of your holiday if you want to be sure to have the best possible Ibiza clubbing experience. There are a few tricks which holidaymakers have developed over the years to minimize the financial damage though. Doing your drinking before you get into the clubs is a popular idea if not necessarily a good one! San Antonio’s west end area is the place to go for cheap cocktails, 3 for 1 beers and pints or vodka red bull. You’ll probably want to arrive at the clubs a bit later than you would at home, even on popular nights things don’t really get warmed up until about 2am so the shorter the time you’re out for the less you should spend.

After parties used to be as much a part of the Ibiza club scene as the parties themselves but in 2008 the council of Ibiza passed a law banning parties starting before 4pm or going on after 6am. The after parties still happen, they’ve just gone underground, if it’s your first time in Ibiza chat up one of the season workers you’ll find flyering for bars in San Antonio or Playa D’en Bossa- they’re sure to have the lowdown on the best places to go when the clubs kick out. Alternatively, if you choose to rent a villa in Ibiza for your holiday accommodation you could always host your own after party. Just keep it to close friends and get the owner’s permission.

Have you been to Ibiza?