2 Days in Malaga: Ideas for a Weekend Break 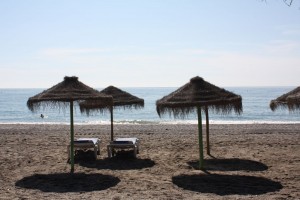 On a recent weekend break in Malaga, Fiona Hilliard of the Glove Box Blog discovered a city rich in art, architecture and shopping. This guest post by Fiona takes us through the essential sights of Malaga and beyond in just two days.

It is October in Spain and Malaga’s main shopping avenue is ablaze with the new season’s collections. Forget London, Paris and Milan, for me, Calle Marques de Larios has got it going on when it comes to finding quality one-offs.  As well as flashy designer boutiques, there are bohemian galleries and those ubiquitous family-run huckster shops that you always seem to come across on Spanish side-streets. I’ve only been in the city a day, but already my arms are leaden with paper bags. In a place that’s as famous for its intricate embroidery and stylish shoes as it is for its hand-crafted bags and shiny ceramics, who can blame me?

Shopping is one of Malaga’s main charms. Pablo Picasso is another. The father of cubism was born here on October 25th 1881.  Malaga has never forgotten its local hero.  The city is home to no less than three museums dedicated to keeping the artist’s memory alive. A stroll around Museo Picasso at Palacio de Buenavista was the perfect way for me to absorb some of Picasso’s finest works. The museum is one of the biggest attractions in Costa del Sol, and is home to a total of almost 200 works of art. Although I didn’t have time to sit and contemplate each and every one, I can safely say that I got an excellent insight into how Picasso developed his style over the course of his career.
Read more about:
>> Getting from Madrid to Malaga 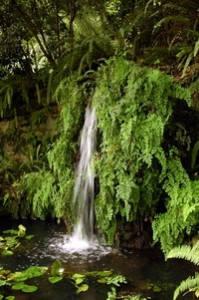 Venture Out of Malaga

As much as it pained me to leave Malaga’s vibrant city centre, a short drive to the outskirts with car hire Malaga brought me to the botanical gardens of La Concepcíon.
At the Finca del a Concepción (La Concepcíon Estate) I found a botanical and archaeological garden exuding such an atmosphere of R and R that I might as well have been a million miles away from Malaga’s feverish hustle and bustle.
La Concepcíon has a fascinating background story. It was originally constructed under the guidance of Jorge Loring and Maria Amalia Livermoore, one of Spain’s most famous power couples of the 19th century.Work began on the estate in 1850, heavily influenced by Maria’s sophisticated tastes.  As well as the lavish residence, there is also a tranquil garden that hosts an impressive neoclassical pavilion where husband Jorge liked to keep his most treasured archaeological finds.
All around the park you’ll find benches and picnic areas.  There is also a restaurant with service areas located close to the entrance. Walking trails have been designed to suit all levels of competence. Some are wheelchair friendly too. All in all, there are almost 4km of paths and tracks to explore.
How to get there: Follow the A7 to Málaga.  Pretty soon you’ll see signs for Cordoba and Granada.  This is how you’ll know you’re on the right track. After around 2km, you’ll pass a service station.  Take the junction off immediately after the signpost for “Botanical Gardens”. Now follow the signs for the gardens to the car park. 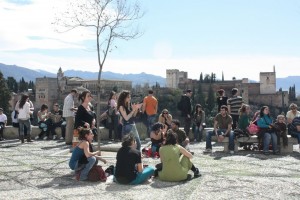 Seeing as La Concepcíon had been such a success, I decided that it couldn’t hurt to do a longer trip. Anyway, what was the point of having Spain car hire and not going the distance? With my heart set on seeing the Alhambra in Granada, I got back out on the road the next morning. The trip was well worth the early start. The Alhambra’s high altitude location makes it all the more spectacular, especially on a bright autumn morning. It’s a huge complex, set against the beautiful backdrop of the Sierra Nevada Mountains.
I was fortunate to be able to take my time and photograph the summer palace with its fountains and gardens, the Palacios Nazaries with its elaborate ornamentation, and the hilltop fortress. I even got a chance to see the cathedral and chapel where Isabel and Ferdinand of Spain lie buried. My favourite part of Granada was definitely the old district known as Albaicin.  Here I got lost in a maze of narrow streets and whitewashed houses.
When I finally made my way out, I headed to the nearby Sacromonte hill which is famous for its gypsy cave dwellings.  It was a real find. In fact, I could probably have spent all day reading about the history and culture of the cave dwellers in the little interpretation centre.
Read more about:
>> Things to do in Granada
>> Free Things to do in Granada
>> 2 Days in Granada: Itinerary Ideas
How to get from Malaga to Granada:
The drive from Malaga to Granada takes around an hour and a half.  The best routes to follow are the A45 and A92 motorways.
How to get to the Gypsy Caves:
On the main road to Sacromonte, head past the Camino de los Tristes, then take a left turn up the hill to Albaicin. The turn for Sacromonte is situated on the right, half way up the hill. Follow Camino de Sacromonte until you spot the caves.
For more information on the Costa del Sol, read about:
>> Free Things to do in Costal del Sol
>> Things to do in Costa del Sol
>> Day Trips from Costa del Sol