One look at a map of Spain, with all that beautiful Mediterranean beaches and those fabulous Spanish islands, and it’s easy to see why there are so many top-notch resorts in Spain. But not all of these resorts are the kind where you’d want to pack a bikini and sunblock. In fact, Spain ranks second only to Switzerland as the most mountainous country in Europe, so it shouldn’t be surprising that there are some excellent ski resorts in Spain. These are some of the top Spanish ski resorts. 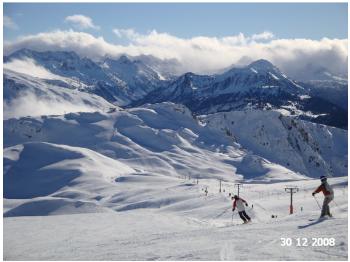 Easily the biggest, most popular, and also most exclusive ski resort in Spain, Baqueria-Beret is in the Catalan Pyrenees roughly 200km from Barcelona in what’s known as the Vall d’Aran. It’s a popular weekend destination for Spaniards which means (including Spain’s royal family and national ski team), and offers great ski runs for all levels of competence. Of the more than 80km of marked runs, there are 4 greens, 25 blues, 20 reds, and 4 blacks. The most famous black run is nicknamed “Escornacrabes,” which means “the place where goats die” – so you might want to approach that one with caution (or at least more than a little training under your belt).

It’s not easy to reach Baqueria-Beret, so it’s mainly frequented by locals with access to their own cars (there’s no train service). The resort of Baqueria-Beret itself offers dog sled trips, helicopter skiing, para skiing, cross-country skiing, and snow shoeing in addition to the downhill runs. There are countless great restaurants to enjoy in the area, and the nightlife is excellent. 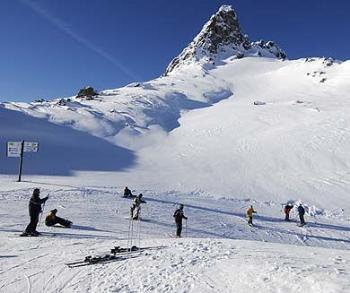 This quieter ski resort in the Aragon Pyrenees doesn’t boast the quality of nightlife or other apres-ski services that the bigger resorts do, but Formigal is still quite popular, especially with young families and beginner-intermediate skiers. The resort has almost 140km of area for skiing, with 6 green runs, 18 blues, 30 reds, and 39 blacks. And if you’re looking for something a little more challenging than what Formigal has to offer, advanced skiers can go off-piste or hop over to the neighboring resort of Candanchu, which has plenty of steep black runs.

Formigal is about 170km from Zaragoza, and only 8km from the border with France. If you’re looking for a budget airline option, you can fly into Pau on Ryanair and rent a car for the rest of the trip. And while there isn’t really anything to do in Formigal besides skiing and other snow sports, the restaurants and bars serve decent food at good prices, so this is definitely not a ski resort limited to the rich and famous. 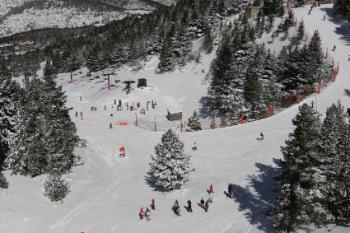 La Molina, like Baqueria-Beret, is in the Catalan Pyrenees, which makes an excellent day trip from Barcelona. It holds the title of the oldest ski resort in Spain – skiers have been enjoying these slopes since 1909. The first hotel for skiers opened at La Molina in 1925, and the first drag lift was installed in 1943. Today, the completely modern ski resort offers 50km of marked runs, including 3 greens, 12 blues, 15 reds, and 6 blacks.

Unlike neighboring Baqueria-Beret, La Molina actually does have train service which runs from Barcelona (the journey is about 3.5 hours one way) and then a bus which runs regularly between the train station and the ski resort itself. Although La Molina is a relatively popular day-trip for Spaniards coming from Barcelona, it’s off the rader of most non-Spanish tour operators – so knowing a little Spanish will go a long way. 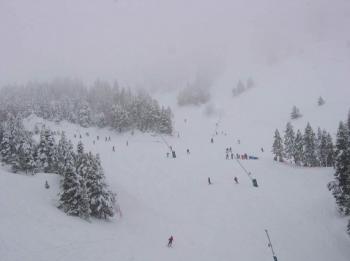 Another popular day-trip from Barcelona, and right next door to La Molina, is Masella. In fact, the two ski resorts are often seen as a package deal by groups of skiers with different levels of ability. Beginners and intermediate skiers tend to prefer La Molina, while more advanced skiers head over to Masella for some great challenging runs (including 80% of the runs, which will have you zig-zagging your way through trees at every turn).

Masella is about 175km from Barcelona, and has nearly 60km of marked runs. Among those there are 6 greens, 15 blues, 10 reds, and 6 blacks. It’s the second-largest ski resort in the Pyrenees, but there is not only no nightlife – there’s nothing at Masella that’s going to compel you to make your stay a long one. The area itself is incredibly beautiful, however, so if you’re just looking for a scenic spot to ski, this is it. 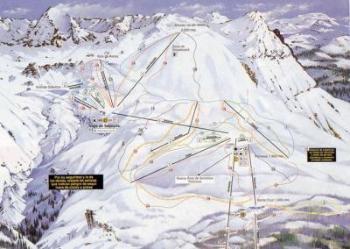 Anytime you see the word “undiscovered” when describing a ski resort, chances are pretty good that it’s no longer “undiscovered.” Still, when compared to the big boys like Baqueria-Beret, Panticosa remains relatively under the radar. It’s 170km from Zaragoza in the Aragon Pyrenees, and is primarily popular with locals. Still, it’s got almost 35km of marked runs (4 greens, 14 blues, 16 reds, and 4 blacks) and a great ski school – and so far the prices are relatively inexpensive. So if you like Panticosa, don’t let the secret out!

As you might expect from a ski resort mainly popular with the locals, the nightlife isn’t exactly hopping. There are plenty of restaurants and bars to choose from, however, many serving up local specialties at good prices. Plus, the resort of Formigal is nearby, along with its livelier night scene. And for the ultimate in pampering, there’s the nearby Panticosa Spa. 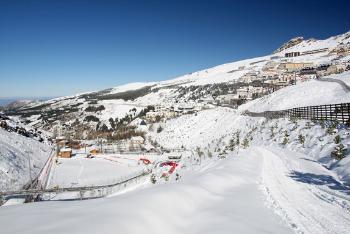 Unlike every other ski resort on this list, Sierra Nevada isn’t in the Pyrenees. In fact, Sierra Nevada is the southern-most ski resort in all of Europe. It’s also the only ski resort in Spain that most people outside the region have ever heard of. The southerly location of these mountains means that if you happen to be one of those indecisive people who can’t choose whether you want a ski trip or a beach vacation, you can head for the Costa del Sol and have both – ski the morning away at Sierra Nevada and sleep it off on Mediterranean beaches in the afternoon (provided you’re vacationing between December-April). Not only that, skiers are also gifted with a lovely view of the Mediterranean Sea, and, sometimes, even Morocco.

Sierra Nevada is in the Granada province just over 30km from the city of Granada, but you’ll still need a car to get up to the resort itself via a windy mountain road. It’s well-equipped with 70km of marked runs, including 4 greens, 21 blues, 23 reds, and 4 blacks. The apres-ski options are great, especially considering the nearby Med beaches and golf courses, and the nightlife is also excellent.

original photo at top by juanpg