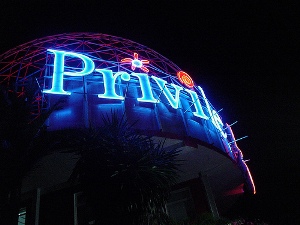 Privilege is the world’s biggest club capable of housing 10,000 party seekers. Having the best sound system on Ibiza, the club is preparing for the grand opening in June.

Privilege is located half way between the two hot spots on the island: Ibiza Town and San Antoni.

Privilege started its life in 1978 when three Basques bought Club Rafael and changed the name to Ku. In 1990 a roof was added, practically closing the era of out door partying but the roof collapsed during a storm in 1991. After renovations, the club reopened under the name Privilege.

The music played depends a lot on the DJ invited on a particular night. Anything from rock, house, trance, electro or pop is played. In the main party room, generally popular rave music is played either by DJs or live bands.

Drink cost around €8-10, which is quite affordable for Ibiza.

You are not allowed to take a camera with you unless you arrange with the club.

Officially, Privilege opens again on June 2, 2008. One of the best laser shows in Europe is scheduled for the grand opening, along with great music.