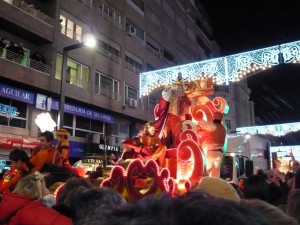 If you’re stuck with a tight budget, you might like to consider traveling to Spain in January. Kick starting the low season for Spanish tourism, January in Spain is one of the cheapest travel periods of the year. Airfare and hotels in Spain will cost less in January than in the high season (mainly in summer), and it’s likely that some tourist sights will also have reduced rates – furthermore, you won’t be faced with long lines and annoying crowds.
While the festive season might have ended in many parts of the world, January in Spain is still flooded with plenty of festive mood especially since the Three Kings Day or Epiphany is the most celebrated event of the year. You’ll find Christmas markets all over the country and if you get the chance, don’t miss out on the Three Kings Parade, or Cabalgata de los Reyes Magos on 5th January evening, held in most Spanish cities. January in Spain can also be a rather refreshing experience to see a different side to sun-kissed cities like Barcelona.
Spain weather in January varies depending on where you are in the country, but on the whole, the southern parts of Spain (such as Malaga and the Canary Islands) are definitely warmer than the northern cities like Santiago de Compostela. Thanks to Spain’s location in the southernmost tip of Europe, you would experience generally milder and warmer climate here than other parts of the continent. The average temperature for most of Spain in January is just over 5degC. Remember that those numbers are averaged out over a huge land area, however, so you’ll want to find out more about the specific cities you’re going to be visiting and what their climate is like in January.
Spain in January isn’t all about the Three Kings Day, but this holiday certainly is in evidence in nearly every Spanish city and town. There are countless markets which stay open up to the eve of the Three Kings Day – these are fantastic places to do your holiday shopping or pick up any souvenir for your family. The biggest Christmas fair is in Plaza Mayor, Madrid, where you’ll find rows upon dizzying rows of stores and food carts.
Let’s not forget that besides the Three Kings Day, there are a few other Spanish festivals in January, here is a summary of these festivals: