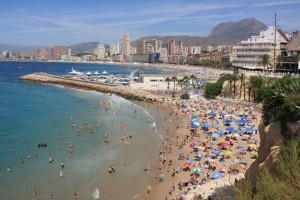 Spain is a magnet for travelers all over the world, whether you are a culture vulture interested in Spanish museums, or a beach bummer looking to soak under the sun in Costa del Sol or dance the night away in Ibiza. Tourism in Spain is definitely big business, but not all corners of Spain are flooded with tourists, if you look hard enough you’ll be rewarded by secluded bays, charming villages and ancient monuments.

July and August represent the highest tourist season throughout Spain, but in many parts of the country, the weather will be intolerably hot. Equally popular periods to visit are early summer and the beginning of autumn as the weather is cool and comfortable yet warm enough to enjoy the beach.

Off-season? Well, there isn’t a bad time to visit Spain but generally the winter months (November to February) can be rainy and cold (island) so there isn’t that much tourist activity.

>>more information on weather in Spain

Culture and history aside, Spain is also well-known for the beaches of Costa del Sol, the Canary Islands and for the party island of Ibiza. The bullfights and the Pamplona running with the bulls festival, the soccer matches and last, but definitely not least, the historical sites and museums, all have their fans among those traveling to Spain.

Most people –and particularly those headed for the Spanish beaches– will book vacation packages in Spain planning to stay for a week or two in a resort. But it’s worth it to check out other places even if you choose a day trip to a different location or taking a tour and exploring the places near-by where you stay.

Undoubtedly the most popular tourist destinations are: Costa del Sol, Ibiza and the Canary Islands.

Nightlife is vibrant all over Spain but, without a doubt, Ibiza is the number one island to head to if you are into partying. Known as a party island for decades, Ibiza is rivaling with two other major party locations: Rimmini (Italy) and Mykonos (Greece).