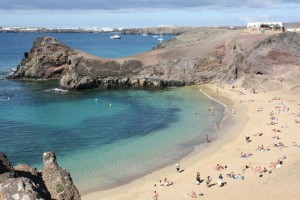 With summer knocking on our doors, June in Spain smells of fiestas and all-night-long celebrations. A month packed full of music festivals and outdoor events, June has everyone out on the streets, sipping sangria alfresco style. As temperatures are high but still bearable (wait till you experience August), most of the country is embracing the arrival of summer.
While the Spaniards are getting ready for their summer vacation, tourists from the rest of Europe are flooding into the coastline of Spain, so don’t expect to have the whole beach to yourself. Popular beach destinations – especially Costa del Sol, the Canary Islands and Barcelona – see a sudden increase in number of visitors, although June is usually not as busy as July/August.
Summer usually means that major inland cities such as Madrid and Seville are empty as locals flock to beach towns or mountain resorts to cool off from the heat. But as summer is yet to be in full swing in June, you will still find shops and restaurants open for business in these cities. Hostels in Spain can get full quickly in June as many travel around Spain for summer festivals. It is best to book in advance before arriving at your destination.
June is usually the best time to visit Northern Spain as temperatures are pleasant and rainfall less frequent. Galicia and Cantabria are especially at their glorious moments as fields are blanketed in lush greenery and colorful meadows.

June marks the start of numerous music festivals and unique summer events all over Spain. Here is a summary of the most important festivals to take note of:

This Catholic festival is celebrated through out Spain although the most impressive processions and decorations are found in Granada. Different cities have different ways of celebrating it, but in Granada people revel in folk music and processions featuring a dragon (La Tarasca).

The longest day of the year – San Juan – is celebrated by lighting up bonfires and fireworks. Popular in towns and cities all over Spain, San Juan marks the official start to summer and people dance and party all night long on this special occasion. The biggest San Juan celebrations take place in Lalín in Galicia, Alicante and Gran Canaria.

Celebrated in Torremolinos, a short 15-minute drive from Malaga, this event sees people feasting on fried fish and participating in several other activities on the beach of La Carihuela.

This big water fight takes place in the mountainous white town of Lanjarón in Las Alpujarras where everyone gets together, splashing each other with buckets of water or water pistols. At the end of the water fight, locals then feast on locally-made cured ham.

An annual electronic music festival held in Barcelona, Sonar has an impressive line-up of electronic music DJs each year. Held in outdoor concert halls, the event draws in progressive music lovers from around the world. Expect to party till dawn.

This massive music and dance event, composing of mega-pop, rock and electronic dance performances from around the world, is one of the biggest in the country. Tickets can be pricey but pop music lovers won’t be disappointed.
Photo by Nellie Huang.