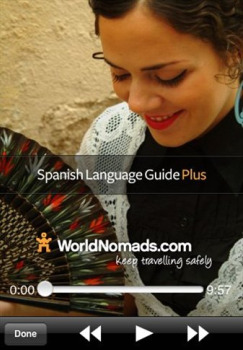 If you’re a traveler who happens to like travel gear and gadgets, then you might think the iPhone is one of the best things to come along since sliced bread. It can definitely make traveling easier, since you can cram a bunch of stuff onto one device that you’d ordinarily cram into your suitcase. And with all the apps available in the iTunes app store, it’s not surprising that there are so many great apps for Spain travel.
I’ve tried to highlight mostly Spain travel apps here that will work offline, since most of us can’t afford the outrageous roaming charges that come with using an iPhone overseas – but some of the apps listed do require an internet connection, GPS, and/or 3G. I just couldn’t help myself with some of them, they’re too cool not to include.
There are new apps being added to iTunes every day, so if your favorite Spain travel iPhone app isn’t included on the list below, be sure to leave your suggestions in the comments section below.

Lonely Planet City Guides
$5.99 each
These apps contain everything you’d expect from a Lonely Planet guide – they’re crammed with information (which makes them sometimes a tad challenging to navigate). LP has iPhone apps for Barcelona, Madrid, and Seville.
DK Top 10 Guides
$7.99 each
I love the pictures and graphics in the DK books, but have always found them too heavy to bring with me when I actually go anywhere. Enter the DK Top 10 series of apps, which are packed with photos and visitor information for the most popular sights. It’s more than just 10 things to do, so the name is a bit misleading. In Spain you’ll find DK Top 10 guides for Madrid and Barcelona.
Barcelona & Madrid City Guides
$0.99 each
These apps include information for Spain’s two biggest cities, Barcelona and Madrid. You’ll get information about accommodation, restaurants, sightseeing, transportation, shopping, nightlife, and more.
100 Best Places to Go – Spain
$0.99
This app has what one guide writer considers the “100 most fascinating tourist destinations” in Spain, including information about where it’s located, a description of what’s there, and some photos.
Spain World Travel
$0.99
This app covers the whole country of Spain, so it’s good for overall travel information for the country, and also has travel information for several cities, including attractions, offline maps, and travel tips.
Spain Tourist Guide
$1.99
This is another country-wide app, but this one seems to be more focused on the whole country rather than having information on specific cities. In this one you’ll find information about Spain’s history, weather, and visa info, along with how to get around the country, when to go, what to see, and where to stay.
iSpain
FREE
There are 10 city guides in this app, and it also includes tools like a currency converter and translator. It’s “GPS-powered,” meaning you’ll have to have that feature on your iPhone for much of it to work.
PLAY. Ibiza
$1.99
If you’re going to Spain for the islands, then this app is perhaps what you’re looking for. It’s a guide to more than 50 of the best restaurants, boutique hotels, bars, and night clubs on the islands of Ibiza and Formentera.
3D Offline Map Mallorca
$2.99
This app isn’t really much of a guide to the island of Mallorca, but it does have cool offline 3D maps of the island and Palma city.
Walki-Talki Alhambra
$4.99
If you’ve got the Alhambra on your must-see list in Spain, then you might be interested in this DIY tour – it’s an audio tour with a map and photos.
GPSmyCity Walking Tours
$4.99 each
Don’t want to join a big group walking tour of a city? Then download these audio walking tours and do a tour on your own time. There’s a GPS function so you know if you’re on the right track or taking a wrong turn, and the cities in Spain are Barcelona, Madrid, Sevilla, and Valencia. There are “lite” versions of each one that you can check out before you buy these full versions, too.
Subway/Metro Apps
I found a few apps dedicated to helping you navigate the various underground transport systems in Spain. The Madrid Subway app ($0.99) is offline, includes an official Madrid subway map, and is a “complete guide to getting around” in Madrid. There’s a Valencia Metro app ($2.99) that offers the same features, plus the ability to use GPS to find the closest subway stop to wherever you are. There are two Barcelona metro apps I’ll point out – the first is Barcelona Metro AR ($1.99), an augmented reality app that requires a network connection and GPS, but has the cool ability to not just locate nearby metro stops on a map but show them to you using your iPhone’s camera. If you’re less into the whole AR thing, there’s also the simple Barcelona Metro Map ($0.99) that has everything you’ll need – a route planner, station finder (no network connection required), and timetable information.

WorldNomads Spanish Language Guide PLUS
$1.99
WorldNomads has a series of language guides, and this is one of the few that isn’t free. There is a free Spanish guide in their series, but it has fewer features. This “plus” version includes more than 550 words and phrases, a 10-minute conversation lesson, and even South American variations on the language (so it’s useful for your trips to other Spanish-speaking countries, too). Most of the categories have expanded sections from the free version as well.
Talking Spanish Phrasebook
$0.99
This phrasebook has text and audio for more than 500 words and phrases, so if you’re having trouble with pronunciation you can always just hit the “play” button and let your iPhone do the talking for you.
Catalan Phrasebook and Translator
$2.99
If you’ll be spending time in the Catalan-speaking parts of Spain, then this phrasebook is another one you’ll want to add to your download list. There are more than 250 words and phrases in the phrasebook, and the translator feature gives you access to more than 5 million words and phrases (the translator does require an internet connection).
Lingobabes Spanish
$4.99
I’m tempted to put this one under the “fun” category, because I’m really not sure how useful it is as a language learning tool, but this app’s language lessons come from (dare I say) teachers clad in bikinis or other tight-fitting clothing.

Spain & Portugal – The MICHELIN Guide Restaurants
$9.99
Foodies traveling in Spain will want this app – it gives you access to more than 4,200 Michelin restaurant listings in Spain, Portugal, and Andorra. It does require an internet connection.
Spain in Tapas AR
$1.99 each
I love these apps, mainly because they’re about tapas. The fact that they’re using the new and trendy augmented reality makes them just slightly cooler. With both, you’ll get access to listings for hundreds of tapas bars in the area, and when you hold your iPhone up you’ll see which ones are nearby. The two areas covered are Madrid and Barcelona. This app does require a 3G iPhone and GPS.
iHymn Spain
$0.99
Take Spain’s national anthem with you wherever you go with this handy app. It includes the anthem itself, along with sheet music and the history of the anthem – but don’t look for lyrics, because Spain’s national anthem has no words.
iFlag Spain
$0.99
While you’re playing the national anthem, you need Spain’s flag to look at somewhere, right? Well, here you are. This interactive app lets you make the Spanish flag move and sway in the “wind” with a touch of your finger.