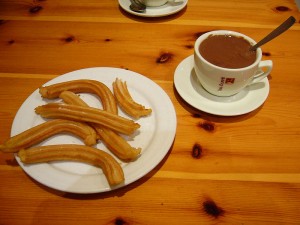 Dubbed as the most popular Spanish comfort food, chocolate con churros is an intoxicating concoction perfect for a nibble in the morning. Churros – crispy deep-fried dough sticks – are dipped in a thick lava of steamy, liquid chocolate.  Churros stands can be found all over the streets of Spain and are enjoyed all year round.
Having originated in Spain, the churros have since evolved into various forms – with one thin and usually knotted (popular in the States) and the other – the Spaniards’ favorites – long and thick with no definite shape, known as porras.
Chocolate con churros is the most popular breakfast item for the Spaniards and is said to be the perfect cure for hangovers. It is very common for party-goers to dance all night long and then head for breakfast at the nearest churreria come morning.
Churros are typically fried in boiling hot oil until they become crunchy and turn golden brown. Before serving, they are sprinkled with sugar. Some like them with just sugar while others prefer to dip them in thick liquid chocolate. The combination of oily crisp dough and sweet chocolate might be bizarre for a foreigner but once you sample more of it, most end up getting hooked to it.
Churros are usually sold fresh from the pan by street food vendors in most cities and towns. Churrerías are shops/cafes that specialize in churros; these are especially crowded in the early morning when hungry chowhounds head to the best churrerias in town for their morning fix. The Chocolateria San Ginés (Pasadizo de San Ginés, 5) in Madrid has gained fame as one of the oldest churreria that still serves up the best churros in Spain.
Chocholate con churros is a quintessential Spanish food to sample when traveling in Spain; be sure to hop over to the nearest churreria for a taste of the popular comfort food.
For more information on Spanish foods:
>> What to Eat in Spain: Famous Spanish Foods
>> The First Timer’s Guide to Tapas Etiquette
>> Twitter Poll: What’s Your Favorite Spanish Food and Where to Eat them?
Photo credit: Wikipedia