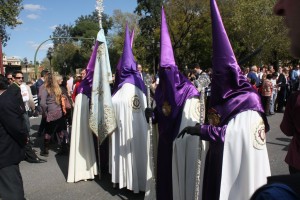 April in Spain is my favorite time of the year: Spring has officially arrived, temperatures are pleasant and the sun is out till late. Spain weather in April makes it a good time to visit, regardless of which part of Spain you visit. There are also many Spanish festivals going on in April, with the most important being the Holy Week celebrations, Semana Santa. As April is a relatively low season for tourism in Spain, airfare to Spain and hotels in Spain are still reasonably cheap, although prices tend to increase during the major festivals.
Spain weather in April varies depending on where you are in the country. On the whole, the southern parts of Spain (such as Malaga and the Canary Islands) experience pleasant temperatures bordering 15 and 22 degrees Celsius. April in Costa del Sol is particularly pleasant, as the crowds have yet to arrive but weather is excellent for sunbathing and beach-lounging. Cities in Northern Spain, like Santiago de Compostela and Bilbao are still slightly chilly, with temperatures around 12 to 17 degrees Celsius. The average temperature for most of Spain in April is just over 12degC. Remember that temperature can vary largely in different parts of Spain and during different times of the day.
With the arrival of Spring, there are numerous festivals going on all over Spain. Here are some of the most important Spain festivals in April.