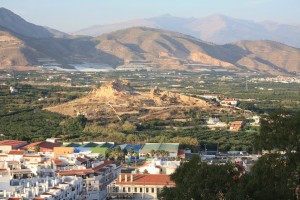 March in Spain sees the arrival of Spring. Possibly my favorite time of the year, Spain weather in March is gorgeous as temperatures rise, the sun shines brighter and flowers start to grow again. Spain winter is almost over by this time of the year . As March is a low season for tourism in Spain, airfare to Spain and hotels in Spain will cost less than usual, and it’s likely that some tourist sites will also have reduced rates – furthermore, you won’t be faced with long lines and annoying crowds.
Spain weather in March varies depending on where you are in the country. On the whole, the southern parts of Spain (such as Malaga and the Canary Islands) experience pleasant temperatures bordering 12 and 18 degrees Celsius. March in Costa del Sol is particularly pleasant, as the crowds have yet to arrive but weather is excellent for sunbathing and beach-lounging. Cities in Northern Spain, like Santiago de Compostela and Bilbao are still slightly chilly, with temperatures around 10 to 15 degrees Celsius. The average temperature for most of Spain in March is just over 10degC. Remember that temperature can vary largely in different parts of Spain and during different times of the day.
With the arrival of Spring, there are numerous festivals in Spain. Here are some of the most important Spain festivals in March.