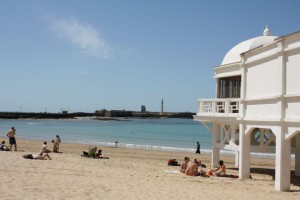 Summer sees most parts of Spain bathed in gorgeous sunshine and sizzling temperatures – perfect weather to hit the beach. As you might expect, this is also the busiest period of the year for Spain’s tourism industry. Each summer, populations at local beach towns swell to 10 times its usual size thanks to the hordes of European tourists flooding its shores.
Airfares and accommodation prices tend to skyrocket between June and August, making traveling in Spain much costlier in summer. Hostels and hotels also fill up fast, so last-minute travelers might find themselves rather frustrated. But don’t fret, with some pointers in hand, you’ll be able to sail through hurdles and find summer traveling in Spain a thrilling ride. We’ve compiled a summer travel guide here to make your journey smoother, easier and cheaper.

In the heart of summer, temperatures can get extremely high and uncomfortable especially if you are inland. The hottest parts of Spain are Central Spain and Andalusia. Further north you’ll find cool and pleasant temperatures although this region is notorious for its year-round rain, even in summer. Summer weather in Spain is also extremely dry, so be sure to hydrate and moisturize yourself.
>> Learn more about the weather in Spain
>> More information about summer in Spain
>> June in Spain
>> July in Spain
>> August in Spain

Spain is undoubtedly one of the most popular summer vacation destinations in Europe. With almost all of Europe and the U.S. going on summer holidays, this time of the year is always the most expensive time to travel. Inevitably, airfares to Spain are also much more expensive in summer than fall or spring. To nab good deals, it’s best to research as early as possible and keep a look out for airfare promotions. Last-minute deals are also possible if you’re quick to seize them.
>> Find cheap flights to Spain
Most international flights are directed to Spain’s two major airports – the Madrid Barajas and Barcelona International Airports. These two major airports have easy access to the rest of the country, via domestic airlines, train and bus system. Budget airlines also fly to several European destinations from these two airports, as well as the Canary Islands and the Balearic Islands.
>> More information about airports in Spain

Things to Do in Spain

Some say the Spaniards live to eat: be it the outrageously flavorful seafood paella or the diverse selections of tapas, Spanish gastronomy is the pride of the country. Ranging from high-end Michelin rated cuisine to budget tapas platters, food in Spain varies largely in terms of value and presentation. So if you’re a foodie at heart, be sure to get your cutlery ready and tuck in to some of the best foods you’ve ever tasted!
>> More information about Spanish food and drinks
>> First Timer’s Guide to Tapas Etiquette
>> More information about wine-tasting in Spain’s La Rioja Region
>> More information about ciders in Spain’s Basque Country
Photo credit: Author’s own