Visiting the Alhambra in Granada 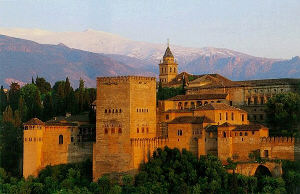 Easily one of Spain’s most visited tourist attractions, the Alhambra is the pride of the city of Granada. This hilltop fortified palace was once the residence of royalty, and is now one of the country’s most famous examples of Moorish architecture and design.

Built during the early-to-mid 1300s, the Alhambra was originally the home of the Muslim kings who ruled the area around Granada. The palace was more than just a royal residence, however, as it was constructed during a time when Muslim rule in Spain was coming to an end – so it’s as much a fortress as it is a palace. In fact, the name “Alhambra” is taken from an Arabic word that means “the red fortress,” as the complex is built largely from red-colored brick.

As one of the coolest castles in Spain, the Alhambra is also one of the most visited monuments in Spain. The majestic complex is set against a magnificent backdrop of Sierra Nevada, with the contrast of gold against white creating a gorgeous setting for Granada. 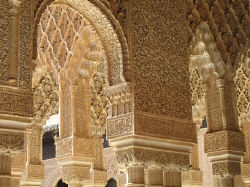 While much of the exterior and interior of the Alhambra is still an exquisite showcase of Moorish art and design, when the palace was taken over in the late 15th century after Muslim rule ended certain alterations were made. The most significant of these is the construction of an entire separate palace within the walls of the Alhambra. This second palace, the Palace of Charles V, was built in the early 16th century for what Charles V (also known as the “Holy Roman Emperor”) intended to be his permanent residence.

Other modifications to the Alhambra in the years after Muslim rule ended included the whitewashing of some of the open artwork, the removal of parts of the winter palace, and the destruction of some of the towers. Napoleon even had plans to blow up the entire palace, but one of his soldiers who was to carry out the plan sabotaged it in order to save the beautiful structure. In the early 1800s, an earthquake damaged the palace further, but a few short years later the first restoration work began and today visitors are able to see the Alhambra in all its glory. 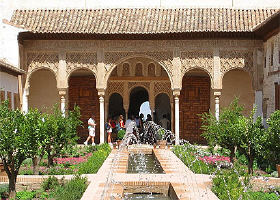 In addition to the spectacular Moorish art and architecture at the Alhambra, other highlights of a visit to this palace include the pretty open squares, fountains and reflecting pools. And of course, because of its prominent position overlooking the city of Granada, the views from the Alhambra are almost as impressive as the palace itself.

Hours: November-February – 8:30am-6:00pm daily, also 8:00pm-9:30pm Friday & Saturday; March-October – 8:30am-6:00pm daily, also 10:00pm-11:30pm Tuesday-Saturday
Ticket Office Hours: November-February – 8:00am-5:00pm daily, also 7:30pm-8:30pm; March-October – 8:00am-5:00pm daily, also 9:30pm-10:30pm Tuesday-Saturday
Admission: €12 general admission (advance ticket sales €13)
€9 for seniors over 65 & retirees from the EU (advance ticket sales €10)
Children 12 and under & visitors with special needs are free
€6 admission to visit the gardens (advance ticket sales €7)
How to Get There: You can walk up to the Alhambra from the city of Granada; it’s a steep uphill climb of about 1km, so take your time, wear comfortable shoes, and bring water! There are several routes, all roughly the same steepness and length.
City buses go from Plaza Nueva to the Alhambra – bus lines 30 and 32 have several stops in the Alhambra complex, including the entrance where the ticket offices are and the tower near the Charles V palace.